Oil bunkering -the illegal tapping, refining and selling of crude – is a growing problem in the Niger Delta of Nigeria. The problem of oil bunkering has often been discussed from the social, environmental and economic viewpoints, but not much has been said about it from the perspective of climate change and the Nationally Determined Contributions (NDC).

It is well known that environmental pollution is a huge problem in the Niger Delta. In large swathes of the region, air, land and water qualities are not anything close to being healthy, as a result of   oil activities. Due to oil spillage, the soil is no longer arable for farming, and the rivers cannot sustain fishes nor produce clean water for drinking. Environmental pollution has deprived many communities in the Niger Delta of their means of livelihood with many of the locals saying that they can no longer engage in their fishing and farming occupations.

Oil Bunkering as a Major Source of Income 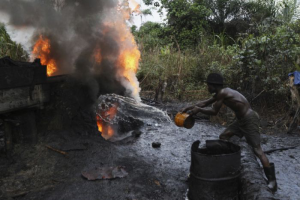 Oil bunkering, known as “Kpo Fire” in their native slang, is mostly done by the youth. Indeed, it has become a major source of known income for the natives. Although the argument can be disputed, many of the youth in the Niger Delta who engage in oil bunkering claim that they engage in it because the environmental degradation caused by the exploration of oil in their place has polluted their rivers and farmlands. Ironically, however, the very oil bunkering to which these youths turn is itself a major factor in worsening climate change and environmental degradation in the area and Nigeria at large.

There is abundant evidence that oil bunkering has created even far more environmental damages in the region, causing unusual temperature levels and the introduction of soot, mostly black soot. Soot is a powder-like form of amorphous carbon, produced during the incomplete combustion of organic matter.

Since bunkering is an illegal and criminal act, the actors mostly generally depend on ramshackle locally made infrastructures which are not at par with what obtains in conventional refineries. Also, they are not regulated; hence, they do not work with any standard operational procedure, despite the delicate and precarious nature of the occupation. Being that their technology is limited, their work is not up to standard, which makes it very tenable to hazards, expanding the risks associated with crude refining. Consequently, there are occasional explosions in the camps which kill people often in large numbers and destroy their property.

Already, gas flaring is the single largest contributor to Green House Gas emission that is the leading cause of global warming and climate change in Nigeria.  According to Nigeria’s NDC gas flaring accounts for as much as 55 million tonnes of GHG emission per annum.  It is also stated that curbing gas flaring is a major target to help meet Nigerian’s contribution to climate change. However, an interesting observation is that the NDC does not refer to the emission that comes from bunkering. There is no way of estimating the number of carbon emissions associated with the thriving illegal oil refining in the country, but the figure could be as high as 10 million metric tons of Co2-e. This must represent a major gap in the figures that go into Nigeria’s NDC and other documents to tackle climate change, such as the recently concluded Third National Communication (TNC).

Soot is hazardous to health; Gas-phase soot contains polycyclic aromatic hydrocarbons (PAHs). The PAHs in soot are known mutagens and are classified as a “known human carcinogen” by the International Agency for Research on Cancer (IARC). In our day-to-day life, we are exposed to different kinds of pollutants, which compromise our state of health and wellbeing; however, gas-phase soot ranks amongst some of the most carcinogenic substances in the world.

Cultism and Civil Disobedience: One of the adverse effects of oil bunkering is that it fuels cultism and civil disobedience. Many of the youths who feel exploited and neglected because of the perceived failure of the government over time to keep to its promise of cleaning up the land and providing basic amenities have a strong belief that they need to defend their illegal activities from the government’s offensive. As a result, they form or join cult groups to form a formidable front that is capable of resisting the government. Locals frequently report hearing shouts of heated fights between the criminal elements and government agencies who attempt to curtail them. My research findings indicate that up to 70% of Niger Delta youth in some areas belong or have previously engaged in cultism.

The government should consider regularizing some of their bunkering camps into modular refineries as they promised. This will be one solution too many. By doing this, the government would have saved the environment as they will now have requisite standard equipment, training and regulations. Economically, it will also create gainful employment opportunities for the locals, which will also enhance the standard of living of the people. Again, the youth will become taxable, as both company and personal taxes will now be collected by the government, unlike before. By this, criminality, cultism and environmental degradation will be drastically reduced if not completely eradicated.

Greenhouse farming technology should be adopted. Doing this will make it possible for agricultural activities to take place there, despite the soil not arable as a result of oil spillage. This will provide jobs, boost their economy and significantly reduce the cost of living in the Niger Delta region.

8 Replies to “Climate, NDC and the Problem of Oil Bunkering in Nigeria”