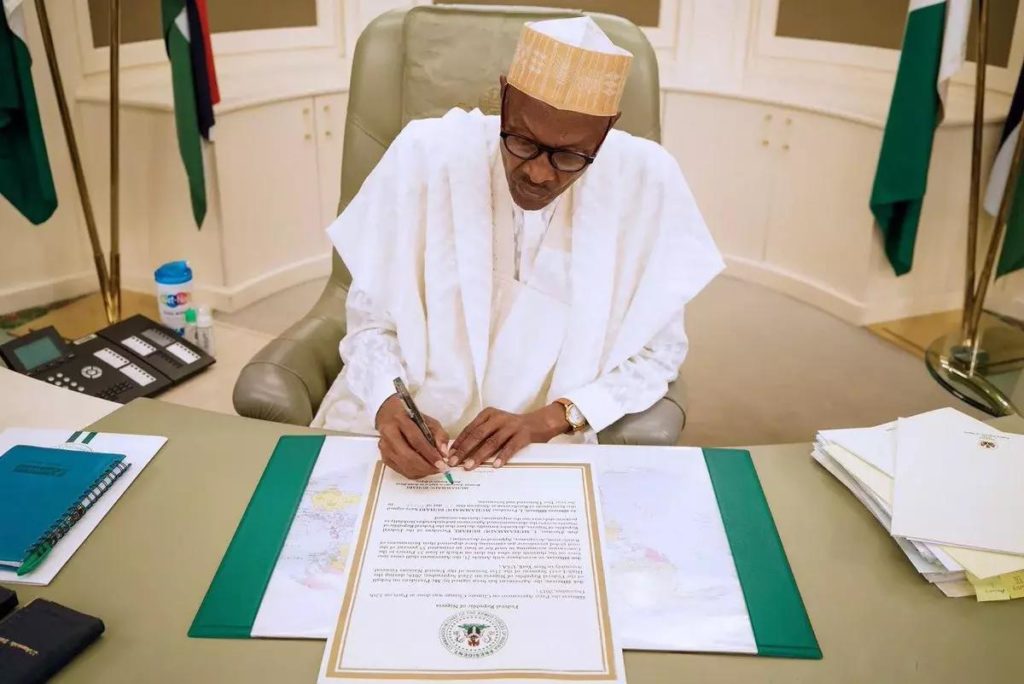 On Thursday, November 18, 2021, President Muhammad Buhari signed into law the Climate Change Bill Passed by the National Assembly. In signing the law, the President has made Nigeria join an elite group of countries that have enacted emissions-target legislation aiming to eliminate carbon emissions. This is a big deal for an oil-dependent nation that is also ranked as one of the most vulnerable countries to climate change in the world.

Climate law has grown in leaps and bounds since the Copenhagen Accord in 2009 but so far only a handful of countries has passed national legislations setting CO2 reduction targets. Other countries in this elite group include the United Kingdom, New Zealand, France, Sweden, Ireland, and Scotland which hosted the just concluded COP26 in Glasgow.

The objectives of the new Climate Act

The main objective of the climate law is to provide an overarching legal framework for achieving Nigeria’s long-term climate goals including a net-zero carbon emission target, national climate resilience, an adequate volume of climate finance, and the mainstreaming climate change actions into national development priorities. The bill places climate change action in the broader context of efforts to achieve inclusive green and sustainable economic development for the most populous black country in the world.

Nigeria has long maintained that it wishes to use its climate policies as part of wider measures to achieve low-carbon, resilient, and equitable economic growth. The Act, therefore, seeks to facilitate the intensive and complex cross-ministerial coordination of climate change action as well as the involvement of businesses and the civil society needed to achieve long-term climate objectives while also promoting so climate-resilient social-economic development in the country.

The Act also sets out to establish a systematic approach for the country to identify the major climate risks and vulnerabilities facing the country and how to strengthen existing capacities to adapt to the impacts of climate change.

Key aspects of the Climate Act

Some key aspects of the Nigerian climate law are modeled after those of the UK and Ireland, but the new climate act also has many innovative aspects specially designed to adapt to the unique Nigerian situation.

The law provides that the government shall set five-year carbon budgets in the context of a National Climate Change Action Plan which should be ratified by the Federal Executive Council. The budgets are supposed to advance efforts to achieve net-zero GHG emission reduction between 2050 – 2070. The five-year budget shall be broken down to the annual carbon budget for each of the years that make up the five-year cycle. President Buhari has, at COP26, already committed Nigeria to a net-zero carbon target by 2060.

The Council shall administer a Climate Change Fund established under the new Act and play a key role in mobilising financial resources to support climate change actions throughout the country. Other members of the Council include the Vice-President of the Federal Republic of Nigeria, who shall be the Vice-Chairman, Ministers in charge of Environment, Budget, National Planning, Power, Transportation, Petroleum Resources, Agriculture and Rural Development, Water Resources, among others.

The Governor of the Central Bank of Nigeria and the National Security Adviser are also members of the Council. This reflects an understanding of the security implications of climate change in Nigeria and the central role that finance will play in facilitating climate action and green transition in the country. It is instructive that the Act seeks to democratize climate governance through the inclusion of representatives of the private sector, youth, women groups, people with disabilities, and civil society organizations in the Council.

The Council will be served by a Secretariat situated at the Presidency that is headed by a Director-General who shall serve as the Secretary to the Council. Secretariat shall advise and assist the Council in the performance of the Council’s functions and duties including the monitoring, verification, and reporting on the extent to which the national emission profile is consistent with the carbon budget. The law provides for regional Director Generals.

The significance of the climate Act

The new climate change law is significant in many ways. It sends a strong positive message to the world that Nigeria understands the enormity and urgency of the climate change challenge and is serious to implement the net-zero carbon pledge made by President Buhari at COP26 in Glasgow.

The high-level body such as the National Council on Climate Change is about the only organ in Nigeria that can be reasonably expected to facilitate the coordination of the various ministries, departments, and agencies whose engagement and active participation would be required to meet the urgent and enormous task of national deep decarbonization required to achieve the ambitious climate target, and steer the country on the path of just green transition to ensure climate-resilient development of the country in the coming decades.

A National Climate Change Council will go a long way in assisting the Federal Ministry of Environment in the goal of setting a national platform for the mobilisation and disbursement of trillions of climate investments needed to scale up and accelerate the green transition efforts in Nigeria in the coming months and years. To succeed in the task of fighting climate change Nigeria will need a large scale of climate finance from both domestic and international sources.

With the implementation of the country’s NDC projected to cost about $177 billion by 2030, only a body as high profile as the National Council on Climate Change can be expected to oversee the task of mobilising such an amount in the context of dwindling oil revenue and a world that is moving away from fossil fuel. President Buhari has in fact put the cost of Nigerian green transition at trillions rather than billions of dollars and he is right!

Nigeria is in a difficult place in terms of climate change. It is extremely vulnerable to climate change. At the same time, it is also very dependent on oil for its foreign exchange earnings and therefore also vulnerable to the transition risks associated with climate change. Hence nothing short of a bold institutional arrangement and action will save Nigeria from climate change. The Climate Act represents such a bold action and if well implemented gives Nigeria a fighting chance.

The signing of the bill into law is very significant but plenty of work is still needed to translate this bold action into concrete policies that will document the emission profiles of the key sectors of the economy, produce credible decarbonisation pathways for the country, strengthen the resilience of the country against climate change impacts and unlock trillions of dollars in climate investment needed to secure the transition.

One must congratulate President Buhari for demonstrating understating of the scale of the challenge and the boldness to sign the climate change into law. Kudo also to Minister of State for the Environment Chief Sharon Ikeazor under whose watch the bill was passed by the national assembly and now signed into law by the President.

It is reasonable to assume that her background as a lawyer, her international outlook, and her selfless approach to governance helped her to appreciate the central role of a legal framework can play in tackling climate change in Nigeria.