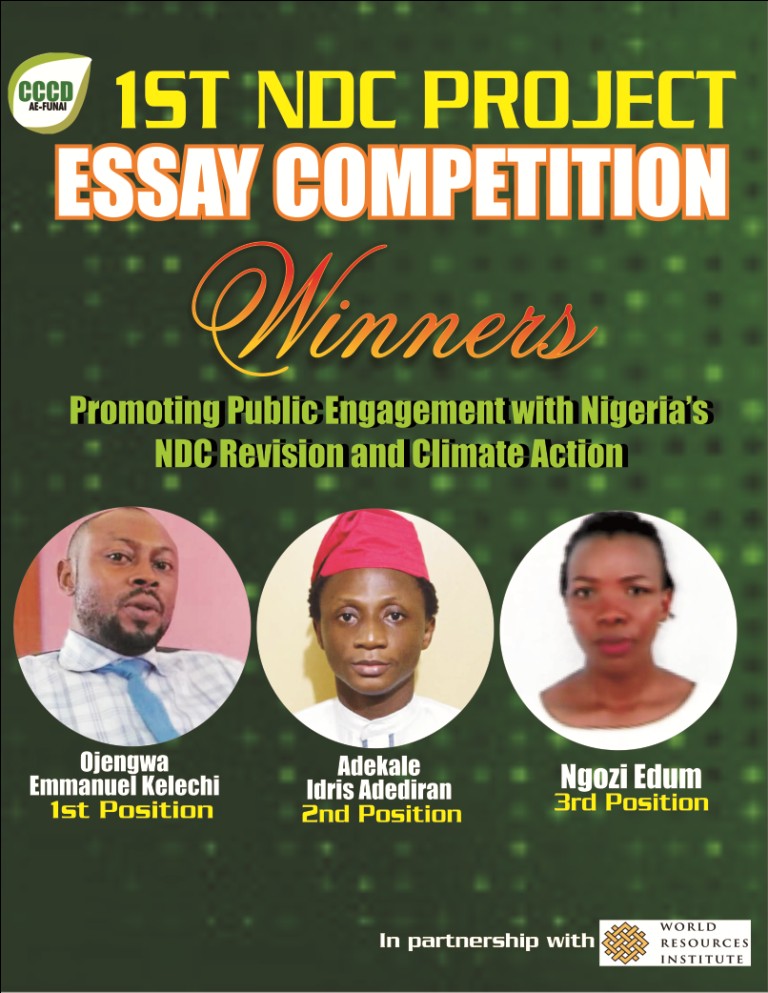 The Centre for Climate Change and Development, Alex Ekwueme Federal University Ndufu Alike, Nigeria has awarded monetary prizes to the top three winners of the just concluded national essay competition on climate change, NDC and the way forward. The candidates whose essays were adjudged to be the best after a thorough review by experts, and voting from the audience received 20,000, 15,000 and 10,000 naira respectively.

He further emphasized that climate change remains a threat to human existence, and young people have a vital role to play in climate actions and decision making in order to protect the our environment.

“Congratulations to Mr. Kelechi Emmanuel Ojenwa, Mr. Idris Adekale Adediran, and Ngozi Edum write their names in full for emerging winners in the just concluded NDC essay competition organized by the CCCD AE-FUNAI under my leadership.

Prof. Okereke while congratulating the candidates for emerging winners of the just concluded essay competition reiterated that the Centre under his leadership would roll out more engaging competitions to increase public awareness of, and engagement with climate change in Nigeria and Africa more broadly.

“My Centre is planning more engaging competitions to increase public awareness of, and engagement with climate change in Nigeria and Africa more broadly”, he said.

Announcing the result of the essay competition, the communication officer of the Centre, Mr. Chinedu Nwasum stated that after a careful review of all the entries by experts in climate change and the review of audience likes and comments, the three top essays emerged.

“we are pleased to announce that after strict, free and fair selection process, the top three essays have emerged”.

According to Mr Nwasum, the essays were graded based on structure, content and grammatical accuracy and at the end, essays written by Mr. Kelechi Emmanuel Ojengwa, Mr. Idris Adekale Adediran and Ngozi Peace Edum emerged as the three best essays. He thanked all the participants and audience for being part of the maiden edition of the essay competition.

“To eliminate bias, the essays underwent an internal blind review to award 50% of the total score. The remaining 50% was awarded based on likes, comments and shares”, he said.

Reacting after receiving the prize, Mr. Kelechi Emmanuel Ojenwa, the overall best essayist thanked the Centre for the opportunity to participate in the essay competition which he described as timely, owing to the visible effects of climate change in the country. He pointed out that he was motivated to participate in the competition to proffer solutions to the obvious consequences of climate change in his immediate environment such as; food shortage, unemployment in the agro based industry due to the changing weather condition, and weather related diseases such as meningitis which has affected the economy of the country.

Mr kelechi advocated for deliberate action towards reducing the effects of climate change in Nigeria by the government taking the lead in climate action and mitigations to ensure that we safeguard our environment for the next generation.

Also, Mr. Idris Adekale Adediran, the first runner up argued in his submission that one of the ways climate change has affected his immediate environment was through flood, which according to him has affected the social economic development of Osun State leading to loss of lives, businesses, as well as mass migration which he believes that through preventive, predictive and corrective measures the government can mitigate the recurring flood in the area. Mr. Idris thanked the Centre for the rare privilege to share his views and perspectives on climate change effect in his immediate environment and pledged to make himself a vanguard of climate action in his home state, Osun state.

Lending a voice to the effect of Climate change in Nigeria, the second runner up, Ngozi Edum also thanked the Centre for using the competition to stimulate and motivate the young people to take action on climate change stressing that youth involvement in climate actions would accelerate the success of government interventions in this regards.

She narrated how the issues of deforestation and insecurity have contributed adversely to the effects of climate change in the North-central part of Nigeria, stating that if, nothing is done urgently central northerners would be in grave danger as their environment is already unfriendly.

The CCCD AEFUNAI had on 24th August, 2020, announced its maiden edition of national essay competition tagged NDC challenge and invited the public to write and submit essay on the “effects of climate change on my environment and how Nigeria’s NDCs can address it”, as part of the Centre’s ongoing project intended to increase public awareness of, and stakeholders’ engagement in the revision and subsequent implementation of the revised NDC in collaboration with World Resources Institute, Washington.