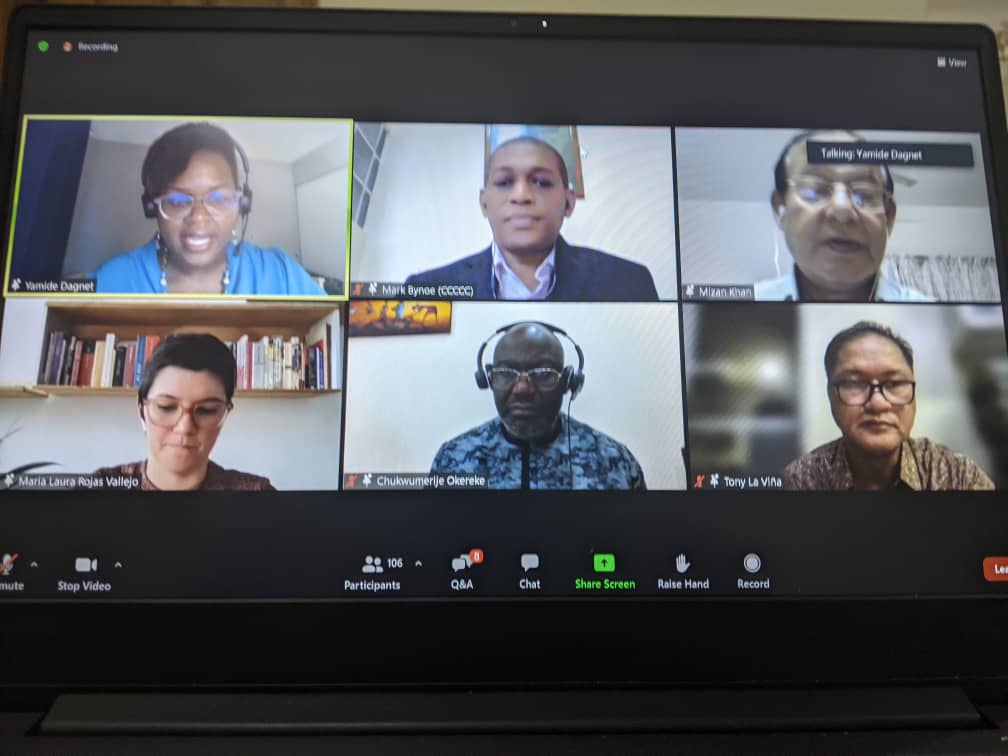 Earlier today, the Center for Climate Change and Development at Alex Ekwueme Federal University Ndufu Alike (CCCD-AEFUNAI)  joined the other partners of ACTS2025 Alliance partners to launch a brand-new report on Securing an Ambitious and Just Outcome at COP26 insights from Climate Vulnerable Countries. Allied for Climate Transformation by 2025 (ACT2025) is a consortium of think tanks and experts mostly from developing countries working to deliver ambitious, balanced, just, and equitable outcomes at COP26. They have a specific aim to elevate and amplify the needs and priorities of developing countries in climate governance as a way of charting a path toward greater global solidarity. Other members of the report include the Caribbean Community Climate Change Centre (CARICOMClimate), the Manila Observatory, PowerShftAfrica, the  International Centre for Climate Change and Development (ICCCAD) based in Bangladesh, TransformaGlobal and World Resources Institute based in Washington DC, USA.

The report makes the case that 26th Conference of the Parties (COP26) in Glasgow a decisive, no-turning-back opportunity to keep the pathways to achieving the goals of the Paris Agreement alive by advancing its implementation and translating commitments to real action on the ground. It is also a critical moment to rebuild trust, restore justice, and strengthen solidarity between developed and developing countries and reinforce confidence in the multilateral climate regimes. Success at COP26 can only be achieved if developed countries and major emitters demonstrate genuine leadership and show credible commitment to transformative change, and real cooperation and solidarity with climate-vulnerable countries to solve the climate crisis.

The Consortium through the reports then proceeds to set out key demands for vulnerable countries in five key areas including (i) Ambition, (ii) Finance, (iii) Adaptation; (iv) Loss and Damage; and (v) Rule and Architecture of the Climate Regime process.

On Ambition the group called for credible commitments especially by developed countries to close the gap toward limiting global temperature increase to 1.5°C. They said it is required that all countries should submit commitments by no later than 2025 that reflect higher ambition and greater resilience based on the findings of IPCC reports and the outcomes of the global stocktake, and strongly encourage countries whose latest NDCs do not align with the 1.5°C temperature goal to submit an early update of their NDCs by 2023.

On Finance, the report calls for urgency in the scale up of climate finance and in making  it more accessible. Developed countries, they said must update their climate finance pledges to meet the commitment of US$100 billion per year by COP26 and adopt a roadmap for delivering, at a minimum, $500 billion over the period 2020–24. Furthermore, rich countries must acknowledge that trillions rather than billions need to be mobilized or shifted to achieve a 1.5°C-aligned transformation of our economy and society, and launch a robust process to set up a new finance goal based on lessons learned, science, and the needs of developing countries.

On Loss and Damage, the group called on countries to shift focus toward the proper implementation of actions addressing losses and damages due to climate impacts. They demanded for the establishment of Loss and Damage as a permanent agenda item under the Subsidiary Bodies and called for efforts to operationalize the Santiago Network on Loss and Damage needs to go beyond a website towards the establishment of a more effective mechanism to catalyze and deliver the needed technical assistance to vulnerable countries.

On Rules and Architecture, the group 3 called on Parties to adopt overdue rules for Paris implementation that foster ambition, promote equity, ensure integrity, and are inclusive. This include to adopt additional guidance for the enhanced transparency framework and the global stocktake that fosters trust, is comprehensive, ensures the inclusive assessment and understanding of countries’ efforts, and informs the most ambitious decisions needed in this decade. They also demanded that parties should come to an agreement on five-year common time frames for nationally determined contributions (NDCs) starting with the 2025 submissions, in sync with the five-year ambition cycle of the Paris Agreement and in response to the urgency highlighted by the Sixth Assessment Report (AR6), published by the IPCC.

The group says Glasgow is the last opportunity to keep the 1.5°C goal alive. Failure to deliver ambitious outcomes in Glasgow will move the world closer to condemning the most vulnerable nations and communities, including the generations to come, to the costliest, most dangerous future. They said that it is in the interest of all nations, both developed and developing, that governments act with solidarity, courage, to deliver a more sustainable, prosperous, and just future for developing countries and the rest of the world.